The Trailer and Rachel's Bike are both sold. I'm looking forward to our next ride. In the mean time, I've ridden out to Mennonite Church USA Convention 2009 in Columbus, OH this year. I dipped through the Ozarks and then rode up the Ohio River valley - very nice 1200 mi. Here's a clip from the old helmet cam (held dow near road level) if any's looking for something to watch...
Posted by Neufeld Family at 7:22 AM 1 comment:

hey. glen. good idea. my adventures have slowed to a dead halt at the moment, but if anyone is at all interested in past stories and pics, (although i'm desperately behind right now) from past adventures of mine...... http://nurse.neuf.ca/
until the next menno___ trip....... and this time....asphalt. ancorage here we come! mmmmm. ready glen?
thanks to everyone who supported us along the way with all of this.
Posted by rachel at 8:12 AM No comments:

Before Menno Baja blogging was a foreign concept for me. Now that this trip is complete I have started my own blog. If you are interested in following what I am writing please check out http://seethefaceofgodinthecity.blogspot.com/
Posted by Glenn at 12:07 PM 2 comments:

Well, since the trip's over, we've got some stuff to sell. (Both are obviously cleaned up now, but I haven't taken any pictures of them since) I hope this isn't too far out of line, and I appreciate you passing this on to anyone who might be in the market. Contact Russ or express interest in a comment and I'll be in touch.

First is our trusty '97 16' W-W Steel Cargo trailer. It's got dual 5200lb axles, and we will leave our bunks and tie-downs in if anyone wants them (current setup sleeps 4/5 plus any mattresses you put on the floor). We've added a small side window, repaired the side door (including a new locking latch), sealed/insulated it, and rewired it: a 7-pin connector, electric brakes and a break-away brake activator. Steel provides much better theft security than aluminum. Asking $3300 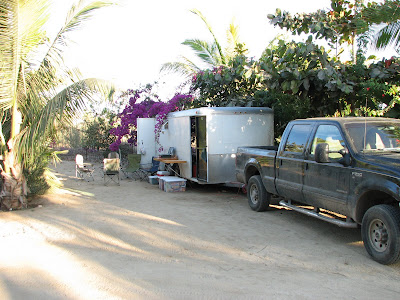 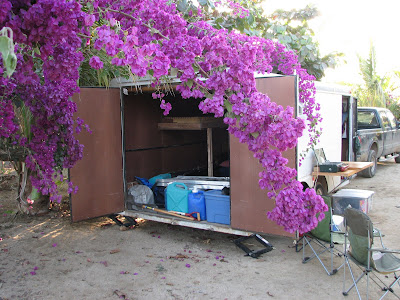 Also for sale is my globe-trotting sister's low miles ( under 3800mi.) '96 Yamaha XT350 dual-sport/enduro. White/Blue, with your choice of tires: Pirelli MT21 (90% offroad duty rating) with ~1000mi. on them, or Pirelli/Avon combo (90% onroad duty rating) with a few thousand mi. (guessing - more than half life still left). It picked up a dent in the gas tank on this trip (from the turn signal when Rachel went down.) It's not creased heavily, could quite possibly be pulled out (I'm hoping to talk to my local expert about that), and certainly doesn't compromise the tank in any way. Fires up right away - no mechanical issues. Nice trail bike or run-about. Asking $2200 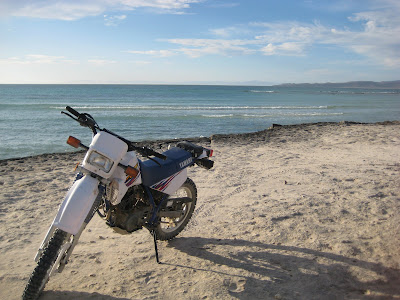 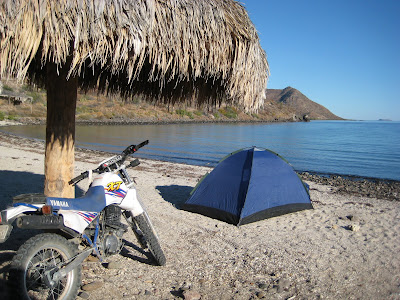 Posted by Neufeld Family at 10:39 AM No comments:

Posted by Neufeld Family at 9:32 AM No comments:

I held Glenn's camera in my left hand to catch some of this amazing bit of road riding, since my helmet cam batteries seem to have died again at this point (the ones I bought at the gas station there didn't last half as long as the ones from home...)

Posted by Neufeld Family at 7:42 AM No comments:

Just a few more clips... (since they're SO much faster to upload here at home)

Here's a nice short example of why the video was getting so fuzzy by the end of the trip. I rode in a dust haze a fair bit at the back of the pack. I just opened the camera up today to blow out the dust - wow! Almost surprised it still worked at all. There's something to be said for no moving parts...


Here's another reason - dust sticks worse when the lens is wet... it's hard to keep the water from splashing to head/camera height (even going as slow as I dared in a sand/silt bottom river). I tried standing up, which helped, but I had also cracked my right boot, so I sat on this one and lifted my feet in an attempt to reduce the water in my boot - got wet anyway, as it turns out.

On the last day, we missed our turnoff (of course) from Santo Domingo on our way to Mike's Sky Rancho (looked more like a driveway/side road, and went basically straight up several hundred feet of mountainside). In the process we followed the first road out of town down a valley with a creek in it, and crossed it half a dozen times before discovering our error in the face of locked ranch gates, so we got to do them all in reverse. We then had a lot of smaller crossing throughout the rest of the day's ride, so we saw more water this last day than the rest of the trip combined. The pit of dispair didn't look so bad after all this, but it also helped that this flowing water was transparent and you could see how deep most of it was.

Livestock was also a constant in riding through back-country/ranch land, and even main roads like Mex. 1 (especially at night). These cattle in the north were much less emaciated than the nearly walking skeletons we saw in parts of the southern deserts.


I have a thing for cliff-side vistas. Too bad the helmet cam is so gritty - doesn't even begin to do this countryside justice. (This one's for you, mum)


Even standing up the roads were often rougher than they look in the videos. This was a pretty nice one, especially considering how steep a decent into the valley it was (the steep ones often wash out badly since it's the easiest/fastest way for rains to get to lower ground).


What a day! I wish I had recorded some of the gnarlier sections - they were as challenging as anything on the trip, though mercifully shorter, since we were already behind schedule. Next time I'm taking more video/pictures in the rough spots, even when we're against the clock. :-)
Posted by Neufeld Family at 5:23 PM No comments:

Menno pauses to shed a layer and check his maps as he approaches the Baja Sur state line...